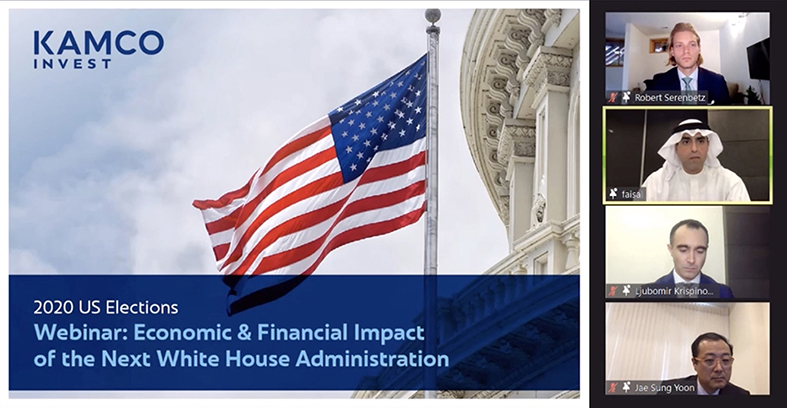 Kamco Invest hosted a webinar discussing the economic and financial impact of the next White House administration following the upcoming US Elections on November 3rd, 2020 with senior representatives from New York Life Investment Management and Kamco Invest.

Several key topics were discussed to provide an understanding of the expected response of the next president and his administration to the current economic challenges facing the United States and more importantly, their impact on global and regional financial markets.

The most notable takeaways from the event are potential impact on the US economy and global financial markets, oil markets, the US dollar and trade wars.

Yoon leaned on historical data to show that regardless of the outcome of the elections and as was experienced following past elections, markets predominantly performed positively following an election With the exception being some cases inclusive of the global financial crisis in 2008 and the burst of the dot-com bubble in 2000. Moreover, market performance is less impacted by a specific political party than anyone might expect. However, investors anticipate a sizeable fiscal package following a “Blue Wave” victory, which is defined as a Democratic win of the Whitehouse, the Senate and the House of Representatives – a positive near-term catalyst for markets.

Yoon added that regardless of the outcome, both party’s agendas include an increase in infrastructure spending. and state and local taxes could also go up under any party as well. Historically, the S&P 500 index rose 11.3% on average during election years since the year 1928. Volatility tended to rise leading up to an election, but historically and on average, it tended to move lower after that. One expectation remaining constant is the fact that the Federal Reserve will maintain interest rates near zero for longer. Expectations that interest rates will remain where they are until possibly 2024.

On oil, both candidates will have the opposite impact on oil supply with the incumbent most probably maintaining current stance in support of the US oil industry. Krispinovic added that the current situation with depressed oil prices are due to the high levels of inventories that was present even ahead of the COVID pandemic. These are challenges that will take time to pass through but will be quite challenging with the waning demand due to the pandemic. Serenbetz added that should we see a Biden win then pressure in the form of government subsidies and increased environmental protection policies will result in a reduction in the demand for oil and increased pressure on the US shale industry. Yoon agreed and suggested one measure may be to limit drilling companies’ ability to operate on federal properties.

Krispinovic noted that the support, or lack thereof, for the US shale industry will have a direct impact on our region. Further support means higher supply, putting pressure on prices and further deteriorating the advantage for the GCC. The lack of support for US shale producers will in return put positive pressure prices by curbing supply, which in turn will be positive for our region.

It was also noted that over the last decade, the weight of the energy sector in equity indices has fallen significantly from approximately 20% of the index. Now it only represents a low single digit’s weight in the S&P 500 index. This could quite possibly change in the wake of an increase in oil prices at some point in the future once the supply/demand imbalance passes through.

On the dollar, all speakers agreed that there is a clear and present pressure for the value of the dollar to decrease versus major currencies. The US dollar interest rate advantage has been eroded almost completely this year, an eroding of the advantage of higher earnings would most likely accelerate the trend of a weaker US dollar. A Democratic win could have some positive pressure on the dollar should fiscal reform take effect in the form of higher corporate and other taxes.

One thing that all speakers agreed on was the trajectory of each candidate towards the subject of trade wars. An incumbent administration will surely demonstrate the same momentum on China and possibly Europe as well. A continuation in the escalation of trade tensions does not bode well for our regional economies. Quite simply, China is the biggest customer for our oil. Any disruption in trade could disrupt demand for oil. A Biden win will surely bring the opposite of that but still carry its own risks to the region. Through the recovery of previous agreements abandoned by Trump could escalate regional geopolitical tensions as well.

Al Othman concluded the session by emphasizing the importance of contemplating the future to take necessary actions. For every challenge there lies and opportunity and Kamco Invest positions itself to guide its clients through the multitude of challenges ahead.

If you need any additional information or have some inquires, please visit our Media Contacts page.